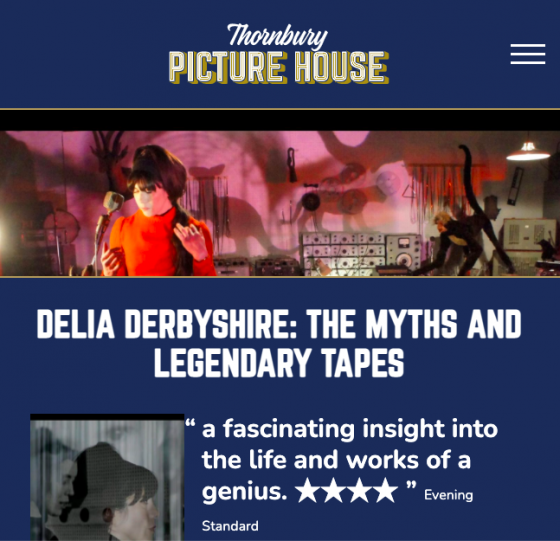 The Sounds of Tomorrow at Thornbury Picture House

As part of The Sounds of Tomorrow, I’ll be playing in the foyer of the wonderful Thornbury Picture House before each screening of the Melbourne premiere of the much anticipated Delia Derbyshire bioflick.  You can book tix here, and more info below:

“This special event & Melbourne exclusive features a live performance by Melbourne electronic outfit, THE SOUNDS OF TOMORROW in the bar before each show.

A true pioneer in audio exploration and psycho-acoustics, Delia Derbyshire conceived one of the most familiar compositions in science fiction, the Doctor Who theme, while working in a BBC basement. Her soundscapes felt like they connected to another realm. Kicking off with the discovery of 267 tapes in an attic, along with a treasure trove of journals hidden in her childhood bedroom, this film tunes in to Derbyshire’s frequency; that of a life-long non-conformist, whose peals of laughter in an archive interview tickle with delight and eccentricity.

For the Melbourne premier on Friday, April 30th, we are extremely lucky to have a live, electronic performance from THE SOUNDS OF TOMORROW.

The band comprises of electronic pioneer, Nicole Skeltys (B(if)tek, Artificial, Melbourne Electronic Sound Studio) Mark Gardiner (soundscape guitarist virtuoso/ cinema soundtrack composer) and Bill Garret, the British synth dude who we try to leave behind but he keeps finding us – his influences are Don Letts, Gillian Gilbert, Bez and that woman from Propaganda that just shakes the tambourine.

Delia Derbyshire: The Myths and Legendary Tapes is presented in partnership with EMC and Groovescooter and proudly supported by a Darebin City Council Arts Recovery Partnerships Grant.”