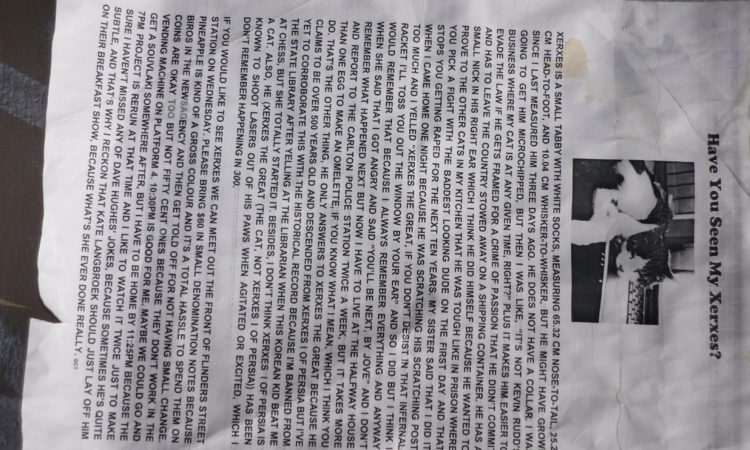 Books read since leaving Pittsburgh for Melbourne (Australia) a month ago:

All of these are extremely good books. However, only one of them has delivered a handful of lines that continue to lap through my brain, like the headlines that scroll leisurely but insistently under syndicated world news stories. And these lines have become my internal teletype because I consider them as providing expert, objective commentary on a personal news story, a brand new, high tension personal mini-drama that has been unfolding for the last 6 weeks.

The lines are from Carrie Fisher’s ‘Wishful Drinking’. Carrie’s autobiography is a slender book, a supremely funny, abbreviated account of her transition from Hollywood child (as the offspring of Hollywood heartthrob Debbie Reynolds and ’50s crooner Eddie Fisher) to a Hollywood star herself – Princess Leia of Star Wars fame. At the height of her movie fame, Carrie married (then divorced) another star – late ’60s/ early ’70s folk idol Paul Simon. Now her most recent celebrity status rests on her lifelong demons – bipolar disorder (manic depression as it was once known) and alcoholism. She writes about these problems and sells lots of books; she has a stand-up comedy routine based on the havoc they have wreaked on her life; and she is even featured in psychiatric textbooks as a famous bipolar ‘case’.

Whats fascinating about Carrie’s writing (and Augusten Borroughs’ for that matter) is that she can make you chortle at the most God Awful Things. This is someone who at time of writing has just gone through 3 weeks of electro convulsive therapy, the treatment of last resort for people with incurable clinical depression, with the net result of losing rather a lot of her memory. This is someone who, when she veers into sadness, experiences no ordinary sadness, rather her emotional intensity:

“(Is) what revs up the motor of misery, guns the engine of an unpleasant experience, filling it with rocket fuel and blasting into a place in the stratosphere that is so-near to something like suicidal tendency – a place where the wish to continue living in this painful place is all but completely absent.”

Does that sound familiar to anyone? If it does, then you will fully admire this woman’s determination to triumph over her afflictions through poking her tongue out, show who’s boss through relentless acerbic wit. And the secret to being the wryly smiling, lash holding madam of your own f**ked up emotional life? Carrie explains that something happens and lets say “maybe its tragic, even a little bit shocking. Then time passes and you go to the funny slant, and now that very same thing can no longer do you any harm. So what we’re really talking about then is: location, location, location.”

Its that phrase “location, location, location” that has been my personal Times Square news ticker for the last month and a half. And that is because I started to experience acute stomache pains just before leaving Pittsburgh. And these pains have continued, more or less unabatedly, for the duration of my Australian visit, finally forcing me to cancel my flight back to the States last weekend, the day before I was due to drag my bags out to Tullamarine airport, loaded with yobbo hats, stubbie holders, boomerangs made in China and other fine examples of Aussie kitsch for the folks back home in the ‘Burgh. I have been waiting for my mind to stop wringing its neuronal hands (wow, what a great image), snap itself out of the shock of yet another health crisis (3rd in less than 3 years), and get to that location where everything feels safe again – the funny side. And today I hope I’ve finally arrived.

The view from the pain-killer balloon ride

Health problems are incredibly dull. Who wants to read about someone’s battle with illness or list of surgical procedures? Well, some people I guess, but not me. So let me get the facts so far out of the way quickly so I can move onto the much more satisfying practice of riffing on ideas and amusing myself (if no-one else) with assorted observations.

Meanwhile, here are some reflections upon my breaking news story:

Severe pain doesn’t ennoble you. It turns you into the most self-absorbed person imaginable. Untold suffering in Haiti? Massachusetts lost to the GOP? Whatever. All that matters to my brain is the spot next to my right hip and that night’s prospects of being able to sleep.

That is, until the heavy duty analgesics kick in. Then, PUFF! the dragging weight of my body drops away and my consciousness expands dramatically like an air balloon. From this lovely floating height, I notice there is a by-election coming up in Altona and decide eagerly that I must help The Greens staff booths again. I see Devendra Banhart is playing at Billboard next Wednesday and I decide I really want to go.

And most importantly I see – with crystal clarity – the never ending parade of human kindness of which I am a massive beneficiary. Tash immediately by my side, at Bar Open in Brunswick St, for post-diagnosis debriefing and alcohol supported cheer-ups. Aaron and Lisa uncomplainingly letting me stay on their couch, feeding me and providing nightly DVD distractions as they try and pack up around me for their move to NYC less than a month away. My bro, Kim, ratting through the TS bookshop looking for books on alternative treatments for my condition. Nick just giving me his second hand Volvo, bought only two weeks ago, to drive around for the duration of my stay. Kerry asking me to come down and recuperate, post-op, at her beach-side house. Lucy buying me tickets to Banhart. My doctor frantically ringing around, ‘grovelling’ as he put it, trying to find a specialist to see me as soon as possible. The list goes on.

And I see the advantages of missing out on a grey Pittsburgh winter in favor of yet another summer in Melbourne, appreciating like a tourist now, the groovy bars, the amazing food, the relaxed lifestyle and bounty of good live venues.

So my final observation is this: surely the question is not ‘why do some people become addicted to opiates?’ but ‘why isn’t everyone wanting to clamber into the pain-killer balloon?’. You can circle your life in ’80s days, largess is no effort at all, and everything gleams with a calm and fascinating goodness that most of us haven’t noticed for a long, long time.

Have you seen Xerxes?

And if I hadn’t been in a hyper-aware state, I might not have noticed the ‘Missing Cat’ notice pinned on the wall opposite the tram stop, as I waited to catch a tram up Brunswick St to see my acupuncturist last Thursday. After a few minutes of standing and looking vacantly at the the flapping piece of paper, I finally registered that, underneath the compulsory cutie pie picture of missing puss, there seemed to be an unusually long screed of text. Very long – taking up a whole page in fact. I stepped closer and began to read. I was not disappointed – the notice ‘Have you seen Xerxes?’ turned out to be one of those random acts of beautiful pranks that put a smile on your face for the rest of the day. Here is the notice – hope you can read it OK.

Till next blog, when I will hopefully know how long my latest hospital holiday is likely to last…