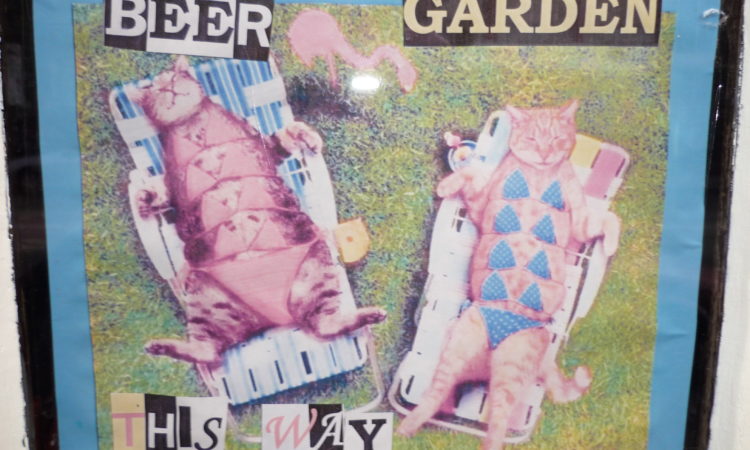 Last week, I was walking down Sydney Rd with Tia my good buddy and fellow veteran of the breast cancer wars. We had just finished lunch at the A1 Middle Eastern Food Store and Cafe, which consisted of a heaping plate of falafel, dips and salad – all still brilliant value for only $6. Tia had that morning kindly ferried me to my post-surgery appointment with my gynecologist, then whisked me back to my old stamping ground in Brunswick for a feed and debrief. As we made our way back to her car, I was struck temporarily motionless by a bout of knife like cramps, which made fish in my handbag for my post-operative pain-killers. As I drew them out, Tia immediately recognized them and remarked cheerily “Ah, Oxycontin – the drug that killed Heath Ledger.”

Of course, even I knew that Heath Ledger, like all modern troubled celebrities, did not die of a single drug but rather a cocktail of drugs, most of them prescription. In America, if you have the money and the will to get high, you can get whatever you want from the right, compassionate doctors. But I was impressed that I’d managed to get my hands on something that powerful and addictive without even trying. Where most schmucks are shoved out of the hospital door clutching a prescription for boring old Panadeine Forte which can hardly kill a hangover, I had been issued with no less than the painkiller of choice for celebrities. Subsequent Googling found that Oxycontin had apparently also been implicated in the deaths of Michael Jackson and Anna Nicole Smith. Florida, apparently, is the site of an “Oxycontin epidemic” and something like 11 people a day die from prescription drug overdoses. And finally I realized I had in fact read about the drug and its lethal properties only a few weeks ago, in Carrie Fisher’s wonderful autobiography Wishful Drinking : one of her closest friends dies suddenly in his sleep due to a combination of sleep apnea and Oxycontin. Carrie explains that the Hollywood cognoscenti know the drug by its nickname – Oxycoffin.

The fact that Tia knew more about the drug that I was on than I did typifies our very different ways of dealing with powerful threats to the body. When Tia was going through radiotherapy, for example, she found out the makes of the radiotherapy machines that were being used by her hospital and researched their comparative efficacy and longevity. When I was going through radiotherapy, I hunched next to Byron in his (then) little Sydney Rd studio and spent day after day nit-picking the mixes of the Dust album and chewing on Lebanese spinach pies. Tia wanted to know as much as possible about her treatment and had the formidable intelligence to absorb a great deal of medical and statistical information. I wanted to know only the bare minimum, supplemented by the intuitions of tarot readings and the murmurings of nice reiki healers. When it comes to certain kinds of facts, you could say I am a bit of a scaredy-cat.

But I wasn’t scared of Oxycoffin. To the contrary, I was delighted to be introduced to its dark glamor. And I could readily understand why it was such a popular way to cast off this mortal coil. To quote America’s hippest gothic country and western stars, The Handsome Family:

“Remember the first time
We slept together
You said it felt like when you learned to float
This is why people OD on pills
And jump from the Golden Gate Bridge
Anything to feel weightless again”.

Thats what Oxycoffin was delivering, beautiful weightlessness. Except for the few traumatic days after surgery, when nothing could have alleviated the pain except a morphine drip, an induced coma, or death, Oxycoffin had heroically stepped up to the task of severing my consciousness from my body, the peak experience of several months climbing the opioid mountain. I started to steadily work at on-line tasks for Squonk Opera again with effortless concentration, enormously relieved to be earning an income again. I started working on an arts grant. I serenely packed my bags for the millionth time in two years and relocated from Aaron and Lisa’s house (they left for New York) and unpacked them again in my brother’s flat in the outer suburban wilds of Altona. Last Wednesday, I even drove Nick’s Volvo out to the local gym and gingerly did some light weights. However, by Friday I realized that something was amiss. To quote Charlene , yet another American music legend, albeit of a significantly different psychological and aesthetic bent to The Handsome Family:

“I’ve been to Niece and the isle of Greece while I’ve sipped champagne on a yacht
I’ve been to paradise, but I’ve never been to me.”

I realised that I’d been spending so much time in controlled release oxycodone hydrochloride paradise, I had no idea what ‘me’ was up to, specifically whether my body was actually healing or not. Was I really able to go to the gym less than three weeks after a major operation, or was that as stupid as someone on LSD jumping off a cliff because they are sure they can fly? So on Saturday, I resisted creating the happy wake-up ‘snap’ sound of punctured foil with its promise of ‘here we go back to Niece and the isle of Greece, crack open that champagne’ set to lush early ’80s string arrangements, and instead started to plunge, slowly but surely back into ‘me’. And a few hours later, me, unfortunately proved to be more or less as I had left it, bruised and aching, not even able to sit at the computer for very long, and not a place you’d want to visit unless you liked smelly old vacant lots strewn with empty beer bottles and black dogs.

At about 3.00 am last night, I woke up in my smelly old vacant lot body, profoundly miserable and shit scared of the implications of not being able to work again. It was then that I belatedly had the perfect idea for the comic strip that Aaron and I could have worked on when I had been that rough beast that had slouched towards his couch and curled up there for a month and half. That idea was The Punk Tarot.

Or not so much The Tarot, which can be plenty dark enough if the situation warrants it. But a card set nevertheless, a punk divinatory set of cards.

The New Age has produced scads of divinatory card sets, all of them brightly if generally tackily illustrated, with soothing spiritual and inspirational advice. I have a particularly garish set which I like a lot and only consult when I am sure I just want a really nice airbrushed message -a set of Doreen Virtue’s ‘advice from angels’ cards. Doreen is a “angel therapist” and is lucky enough to be able to converse with angels intimately herself, and can even see them. This later clairvoyance has been particularly handy in designing her angel card sets, as she can describe to the artists what each archangel looks like: they all appear to be caucasian, have great skin and really healthy looking hair. Angels dispense advice like “Thats a brilliant idea!” or ‘Your prayers are being answered!” etc and the enclosed booklet is choc full of Wisdom McNuggets.

But there are times in dealing with spiritual realms, just like there are times here on earth, when surely the best attitude you can adopt is one of righteous anger and outrage. If God did indeed ‘make man in His own image’, then you have admit He must have had a hell of a lot of issues, and the sooner you get that off your chest, then the healthier (or more ‘authentic’ to use pop psy parlance) your overall relationship with divine destiny is likely to be.

So a punk divinatory card set would have images and advice like these:

Image: A picture of a beautiful woman on a beach with bird shit on her head
Interpretation: God has just shat on you from a great height
Advice: Look up to the sky and give God ‘the bird’.

Image: A picture of a beautiful woman with mussed up hair crying into her hands.
Interpretation: Your latest haircut is a disaster, even though you paid $80 for it.
Advice: You better get used to it.

Image: A flopped expensive looking cake.
Interpretation. Lately, everything you’ve tried has turned to shit.
Advice: Find a Tibetan Buddhist temple, find someone to drive you past it, stick your butt out the window and moon it.

You get the idea. The marketing schtick could be something like “Sometimes you gotta replace that ‘attitude of gratitude’ with ‘an attitude of attitude‘. ” Maybe call it simply The Bird Oracles, with a cover picture of the glowing pentecost dove making the eponymous universal sign of dissatisfaction with its wings. I might just do it.

And just in case anyone fears for my soul and believes I will be smote down for my sacrilegious ideas even more than I have been recently smoted, I can only say that after this series of visions, I fell asleep again and when I woke up, lo, I felt much better, well enough in fact to sit at the computer and deliver unto the masses these revelations:-)

I want to end here by sharing a couple of lovely images, aspects of Australian cultural life that are truly admirable.

The first is self-explanatory; I found it a few weeks ago, pasted to the entrance of The Retreat Hotel – one of Brunswick’s finest watering holes, and a good place to see local bands.

The second image I stole off the net and requires some explanation. On Tuesday last week, thousands of Melbournians (up to 20,000 according to some estimates) swarmed into the city protesting the imposition of new draconian laws on live music establishments. These laws were starting to send live music venues broke: they required vast increases in expenditure on security guards and even closed circuit televisions – supposedly to ‘curb violence’ when in fact there was no evidence at all linking live music with some of the appalling outbreaks of violence that have erupted from time to time in downtown Melbourne over the last few years. Thanks to months of intelligent campaigning by supporters of live music and Melbourne’s thriving band scene, the Brumby government was forced to back down on its idiotic legislation.

Soon I hope, I will be well enough to make my way back to The Retreat, down a few champas, listen to some excellent local musos and trade insults with Jesus:-)