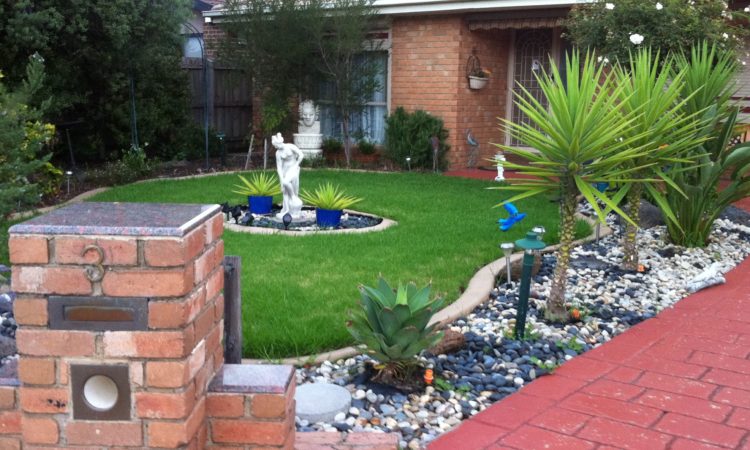 The mudskipper, the shot swan and the transgender politicos

How does someone whose only real talent and justification for being alive is the generation of creative stuff – the puffing out of cotton seeds into the mysterious wind of life, the spinning of fairy floss onto sticks for the emotionally ravenous- wind up working on spreadsheets five, long days a week in an office that drains the blood out of the carcass like a hung side of mutton?

Well, its a common ecological catastrophe and mixed metaphor.

Creative types from working class backgrounds and no other way of surviving do what we do to get by. We spend our days like mudskippers flopping and gasping on a kind of Gilligans Island foreshore of ‘normal work’. Then on the weekends, we slither backwards into the calming, murky seas of unapproved, non-vindicated inspiration; where we can take big gulps of breath in amongst our friends, the purple starfish and slacker seaweed, cello-shaped whales and messages in bottles, and we can roll about hither and thither as the slim, exotic creatures we really are, exhaulting in our mind’s opulent tides. But when Monday starts to hoist itself up the horizon again, we dutifully re-grow our useful little leg-flippers. We point our fishy snouts towards survival and start to wriggle. Then off we go, heaving ourselves to and fro, up and out of the sea, our dorsal fins dragging through wet sand in peak hour with millions of other mudskippers, crayfish, jellyfish, out of our subways, into our elevators, ping! up to our floors, then out into our cubicles and splat onto our payrolls, shortly after nine.

So, that is my life once again, ladies and gentlemen, working nine to five in a State government Department. Let that be a lesson to someone.

But having a regular paycheck again has bought me the Australian dream, a brick villa in the outer suburbs.

At first I thought I had moved into a perfectly normal suburb, having made probably the most normal decision of my entire life. The houses are exquisite in their chirpy brick blandness, the lawns whippersnipped into bowling green perfection, garden ornaments, pencil pines and fake log letterboxes are distributed across front lawns with a frequency that, if you plotted them on a bell-shaped curve, would show themselves to be statistically normal. 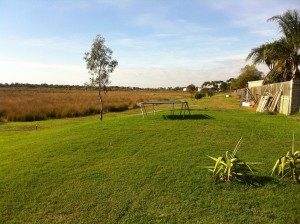 But last week when I sat down with my morning coffee and slowly flicked through the local community newspaper ‘The Star’ , I saw the first sign that all is not as it seems in the safe Labor electorate of Altona.

There on page three was one of the biggest news stories of the week, possibly the year: someone had shot a local swan. With an arrow! But an alert but not alarmed local resident had luckily found the swan in Kororoit Creek and brought it to the Hobson’s Bay Veterinary Clinic, where it was fixed up, “narrowly escaping certain death”, according to the reporter. The picture featured the swan, its snake-like neck drooping across the tender hands of the vet, whose deeply mournful expression compensated for the noncommittal swan, whose tiny eyes and shut bill gave nothing away emotionally. 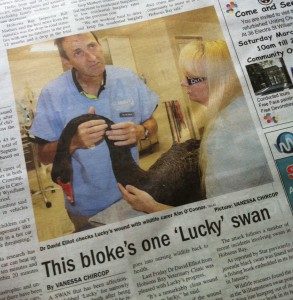 According to the article, this attack was the “latest in a number of recent incidents involving swans in Hobsons Bay”. The Hobsons Bay Weekly also prominently covered the shot swan story and noted that “groups of youths” had attacked swans at Newport Lakes and at Sanctuary Lakes in recent months.

In my day, the disaffected youth from my local suburb did normal things like set fire to the Deputy Headmaster’s car, or shoplifted from K-Mart. But attack birds? I mean how can you notch that up as youth rebellion? Its just creepy.

But I was in for more surprises from my local neighbourhood.

Page 11 of the Hobsons Bay Weekly featured an article about local lass Janet Rice. The lead para read “The first day of March marked the 26th wedding anniversary of Victoria Greens lead Senate candidate Janet Rice and her Nobel Prize-winning partner Dr Penny Whetton.” When Janet married Penny, she was Peter, but Peter had “transitioned” to Penny in 2003. Rice and Whetton still loved each other and the marriage continued, and their two sons now say its “not a big thing” in their lives. 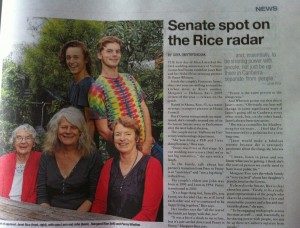 I’d be tempted to dismiss this as a one-off ‘local transgender political couple make good’ story were it not for the fact that the recently elected Mayor of Hobson’s Bay, Tony Briffa, made international news when he became the “world’s first intersex Mayor.” Tony was born with both male and female attributes. He lived his early life as a female (Antoinette), but now lives as a male, although he “considers himself neither male nor female.” He is now Mayor of one of the fastest growing electorates in Melbourne.

I spent some time finishing off my vegemite on toast trying to imagine what it would be like to feel “neither male nor female”. It was an exciting, almost mystical idea, like having achieved some superhuman personal development goal. And as I moved over to the sink and rinsed my cup and plate, I then tried to imagine falling in love with a man and still loving him as he stopped being my husband and became my wife. That too seemed to suggest an emotional maturity and connectedness that was from another galaxy. A galaxy of creatures with Spock-like wisdom who all dressed unisex.

I drew the vertical blinds shut and headed out the door for work, leaving Reg and Warren, my two pink plastic flamingos, to the mercy of any bands of roaming youth who might break into my backyard and mistake them for swans. As I drove Dimples, my hail damaged Hyundai hatchback, the few blocks to the Laverton train station, I looked at the row after row of unassuming brick veneer fronts and aluminium carports with new appreciation. Australian suburbs might look the same decade after decade, but in bedrooms and town halls, and in lakes, things were changing. 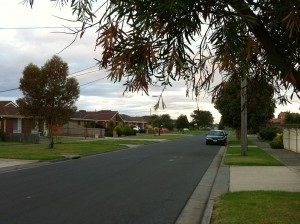 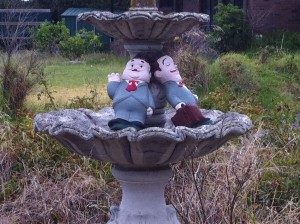