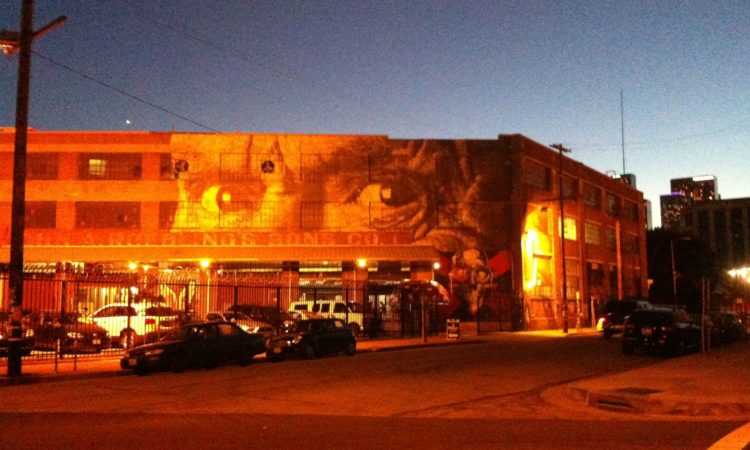 I’m staying in a condo in the City of Angels, in downtown LA. In the heart of Little Tokyo/Arts District. Organised last minute via an international home exchange site.

In a condo owned by private detective Bob N.

After 30 years in the LAPD, Bob quit.  The force gave him a plaque with gold-plated hand-cuffs, his detective badges and uniform stripes. He hung it on the wall in the space between the bathroom and bedroom. Then he lost no time setting up a private detective biz. He hired a bunch of his old LAPD pals to grow the firm.

It’s the week leading up to the 4th of July long weekend, kicking back on the roof-top of Bobs’ condo complex. We stared at the high-rise and palm tree serrated horizon, quality Californian wines in hand from Bob’s collection.

Bob was not what I expected of an LA cop.  He was a gentle, kind Hispanic guy who told me how much he loved the move from his sleepy home town of Pasadena to the vibrant arts district.  Bob had  been divorced four years, but the relationship had died long before that.  Both parties understood that, and the break-up had, in the end,  been handled on the better end of messy.   The Bob moved to the part of downtown LA that was rapidly re-inventing itself as a class A bohemian hang-out, although it was only a few streets away from Skid Row.  He loved his new life.

Skeltys: “So I thought investigating infidelity, tracking down cheaters, was the bread and butter of PI work.  You don’t do that?”

N:  “We do that a bit. They are actually good cases.  You spend a lot of your time driving around, in surveillance. The clients are grateful for what you do. They pay you good money, and they pay you on time.

Hollywood studios haggle over every cent.  They try and make you feel bad, delay payment. Its just their mentality, how they do business.  Life is just one big hype and pay cheque to them.

But we do a good job, and thats how I survive.  My son is learning the ropes of the biz, and doing really well.  He has a health problem, so he couldn’t get into the LAPD.  But he is a born detective, doing great at the company.”

The next day, Bob handed me the keys, gave me a hug and left for Italy with his girlfriend, for three weeks.

I was left in command of Bob’s luxury condo in downtown LA, private gym, swimming pool, micro-cinema, and impressive collection of tequila, for two weeks, while I waited for the renewal of my green card to be processed.

I woke up early hours that morning to the sound of helicopters flapping the hot air not far from my window.

There were sirens.  I rolled over and tried to get back to sleep.

But then I heard a huge police voice bouncing around, obviously from the helicopter, with an Echoplex quality like the voice of God

“Stay where you are. Drop your guns”.

That woke me up.

But after lying stiffly in bed for many long moments, I heard no more. Just flapping, sirens, and the mild hum of traffic on nearby Highway 101.

I thought about the words “I love you.”

I contemplated  how is it that a single lass could find herself skidding through her ’40s, as alone as ever, as I had been for over a decade.  Find herself lying curled up in a foreign bed, waiting to hear a gun fight in the distance.

And I finally fell asleep again.

On Sunday night, I walked around the corner to the local brewery and sausage sensation Wurstkuche. I scoffed down an ‘Austin blues hotdog with onions’  in the saloon-like dining hall, full of artsy types, padded with the sounds of hip electronica.

Then I made my way up the road to the massive Angel City Brewery. Kind of like a paddock full of tattooed Gen Ys peacefully grazing on their micro-brews, surrounded by graffiti art.

At the bar, I got talking to a young woman and man, of obvious Hispanic/ South American heritage.  After we had discussed the differences between the USA and Australian tax systems, as you do, M, the handsome gent with slicked back hair and button black eyes, said:

“Aussies are everywhere, man. I mean, you are climbing a mountain in the remotest part of Peru, and when you get  to the bottom, there is an Aussie.  Doesn’t matter where you are. Aussies.”

I agreed. “We are like ship rats.  Wealthy ship rats.”

M said: “I’ve been to the UK a few times.  You know, its very hard to make friends with the English.  I like the English, but they are so uptight, they only reveal how nice they are when they are drunk.  But they are drunk most of the time, so that’s OK.

I said I’d always found Americans incredibly friendly and open, one of the things I Ioved about being here.

E leant over towards to me and gestured to M.

“We are friends when sober, I’m his wingman. But when we have had some drinks, M starts to find me attractive.”

I said: “That sounds pretty normal.”

“He tells me he loves my hair.”

I leant back and said in a stage whisper:

“You are a very beautiful woman.  Why aren’t you two together? You seem like you have been together a long time.”

E glanced at M and said “We are really just friends through being friends of friends. But yes, there could be a past life connection.”

M grinned and cajoled the barmaid into giving us a final round of drinks, although it was almost closing time.

After a bit more banter,  I issued my heart felt thanks for the company, and got up to leave. E said “Wait”.

She reached for a coaster and scribbled on it.  Then she handed her number to me and said:

“I live in Laguna Beach, Orange County.  Its real pretty there.  I work for the school district, managing maintenance for over 100 schools. I manage a lot of guys”

She rolled her eyes.

“So I’m on call a lot, but Fridays are free.  Why don’t you come down and stay with me later this week? I have two bedrooms.”

I handed her my card and said I was incredibly grateful for the offer and I would love that.  I just needed to sort a ride to Orange County, and would be in touch.

Then I loped out of the brewery, winking at the 20 something guy with the big afro who had carded me on the way in, who was communing with his laptop.  Maybe updating his FB status as “Aussie chick with cool cowgirl boots now gone”  But probably not.