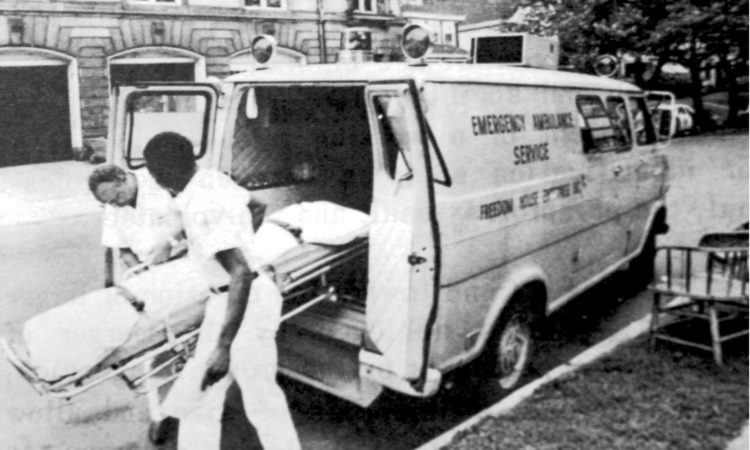 In July, I stopped over in Pittsburgh, caught up with some of my dear friends there, and made a remarkable discovery.  In the late 1960s, a bunch of Pittsburgh doctors and civil rights activists set up one of the world’s first ambulance services staffed by crew who had the clinical skills to actually save lives. Prior to that, ambulances were often just very fast moving body delivery vehicles gunning for the nearest hospital.  In American cities, this often meant guys hauling the injured into the nearest available hearse or police van. White guys.

All that changed in 1966 when David Lawrence, the former governor and Pittsburgh’s legendary mayor between 1946 and 1959, paid the ultimate price for his city’s failure to provide adequate ambulances.

Let me blatantly cut and paste from the estimable Pittsburgh Post Gazette for the next bit of the story:

“On Nov. 4, 1966, the 77-year-old Lawrence was at the Syria Mosque delivering a spirited address at a Democratic fund-raiser when he was felled by a massive heart attack. A quick-acting nurse in the audience initiated CPR, keeping his body alive while a police emergency wagon careened to a halt outside the hall. The officers raced inside with their stretcher, heaved Lawrence onto the canvas, and bolted back to their rig while the nurse tried frantically to keep up, watching helplessly as he slipped into pulseless respiratory arrest. Reaching the police wagon, she squeezed in back alongside her patient, only to find the inhalator/resuscitator was broken. When the cruiser began its swaying, rocking race to the hospital, she was continually thrown off balance and was unable to continue her resuscitation efforts. For too many critical minutes, Lawrence went without oxygen or circulation, and although he was swiftly resuscitated at the hospital the delay caused by the inadequate vehicle and poor equipment left his oxygen-starved brain permanently damaged.
When he died two weeks later, without ever regaining consciousness, his death became a minor catalyst in the reform of his city’s ambulance system.

Lawrence’s death and the publicity it received, worked on Phil Hallen’s mind. The backwardness of the city’s ambulance services was an affront to the young reformer, but he was also troubled by the dismal condition of the inner city, where economic stagnation and restricted city services conspired to create a culture of futility. In his mind the two seemingly disparate issues swirled together until, in February 1967, influenced by the mayor’s death and recent initiatives to bring new businesses to the African-American community, Hallen sat down at his typewriter and banged out “Preliminary Thoughts on the Development of a Private Ambulance Service in the Hill District.” This memo became the founding document for the world’s first comprehensive civilian paramedic service.”
Phil Hallen was then the president of a local charity Medical Fund, a former New Yorker with a degree in public health, an acute awareness of the deficiencies in emergency medical practice ‘on the street’, and a deep commitment to combating racism.

As a result of Phil’s efforts and a handful of other passionate clinicians and activists with vision, the Freedom House Enterprises Ambulance Service was born in 1967, in the heart of Pittsburgh’s inner city ghetto. Designed in part to create jobs for black Pittsburghers, it also pioneered new techniques in emergency medicine which were subsequently adopted around the USA and then internationally.

For the rest of the story, see here – a film has recently been made documenting the history of Freedom House.

I had the great pleasure of catching up with Phil Hallen when I was in Pittsburgh, and then John Moon, both founders of Freedom House.  John now looks likely to be Pittsburgh’s first black chief of Emergency Medical Services (EMS). Fingers crossed.

I’ve had an idea to write a TV series about ambulance services for a while now.

In July, while the sun was baking down on the courtyard pool,  I spent most days lying upstairs on the couch in my borrowed downtown LA condo. As artificially cooled air drifted over me, and corn chips slotted into my mouth one by one, my eyes clamped onto Netflix, following episode after episode of an American TV series from the early ’70s called Emergency!  A long-running series, each episode of Emergency! was an hour long. I clocked up about 300 viewing hours before I had to leave that LA couch for a Pittsburgh couch, then make my way back to London.

I had heard about this show, but it was never broadcast in Australia.  I had heard Emergency! was one of those rare examples of a TV entertainment/action show which ended up positively influencing healthcare practice across America, and I was keen to see it.

Emergency! was produced by the same people behind the popular, and now cult classic, ’60s detective action series Dragnet.  In the early ’70s,  Jack Webb and Robert Cinader became aware that the LA fire department was piloting a radical new idea: train some of its crew in clinical techniques so that they could deliver medical treatment and save more lives when they were called out on emergencies.  In 1972, Webb and Cinader became wildly excited about the idea of documenting the day to day experiences of these crews and what they did. Emergency! was born.

Emergency! showed what the new profession of paramedics did on the scene, and showed it with a fanatical degree of clinical accuracy.  The film crew would go out to actual LA fire paramedic crew incidents and photograph what they saw so they could reproduce the scenes accurately on set when they shot episodes. The writers worked collaboratively with LA’s new paramedics to source and develop all their script ideas. One of the most successful writers for the series was Jim Page, now recognised internationally as one of the pioneers of EMS development, his memory much loved in the paramedic community.

I know all this because I reached out to some of the people who are committed to keeping the history of the series alive, including Richard Yokely who has written a bunch of fascinating books on the television treatment of first responders.

Emergency! was so popular in the 1970s, that it is widely credited with influencing the development of EMS and paramedicine as a profession in the USA.  It inspired a generation of kids to want to be paramedics, not because it showed the work as heroically glamorised or grittily gut-wrenching, but just how it was.  A difficult job that required a high degree of courage, skill and heart. And stamina.

Of course, it helped that one of the paramedic buddies – lanky, grinning, part-Indian Seminole Randy Mantooth–  was awfully handsome and helped keep the ladies interested in the fate of LA County Fire Department Station 51 for a long time.

I got back to London first week of August. A couple of weeks later, I found myself in a cafe just outside Waterloo station, having coffee with the CEO and healthcare manager of one of the UK’s most ethical and hard-working IT and business improvement companies.

They offered me a job, working on one of their business lines: helping UK ambulance trusts get better, more useful, statistical information about their operations, and use that to improve their service.

It was one of those life moments, which are rare for most artists – when one’s passion looks up for a financial peck on the cheek, and, astonishingly, finds lips planted.

In celebration, before I started my job, I spent a Sunday watching – on Netflix again, but this time in London – every episode of the UK’s most recent TV entertainment offering about ambulance services, Sirens.
Sirens is apparently based on a blog and book by Tom Reynolds,  a former emergency medical technician for London Ambulance Service.  It traces the adventures of three (male)  EMTs on the road, and their various relationship dilemmas.

In contrast to Emergency!, if I hadn’t been in ‘research’ mode, I would have stopped watching Sirens after 10 minutes.  But I kept with it for all six, hour long episodes.  I’m glad I did, because it taught me a lot about the pitfalls of trying to write ‘comedy/drama’.

Sirens seems very well intentioned, but it is hopelessly  ‘boysy’, and clinically inaccurate.  It is spot on highlighting the often emotionally confronting and confusing impact of ambulance work on crews.  But it handles these emotional truths with clumsiness, achieving neither the release of comedy nor the grounding of drama.

Despite its good intentions, Sirens depicts UK ambulance services as staffed by well meaning boy larrikins, who kind of ad lib their way through street level emergency situations, and end up shoving people, who often have bottles up their arse, through the curtains of hospital A&E departments – with no triaging, clinical protocols or nuffin.  They get rapped on the knuckles for their larrikiness by stern ambulance controllers who just happen to be pinched looking women in their ’50s who are of course beyond sympathy of any kind because they remind you of your Mum, and you don’t find them sexually desirable.   This might have been the ghost of ambulance services past, but it certainly is a long way from the current, highly skilled and caring reality.

Sirens was caned by Channel 4 after the first series. However,  the USA network  in the States have recently bought the rights, remaking the series  set in a Chicago EMS.

I suspect and hope the Yanks will do a better job at injecting some heart into the idea. And who knows, being Chicago, we might see a hunky black paramedic or two in the starring roles – female and male.    Perhaps I should include a luscious multi-ethnic girl character in my series called Freedom Ladytooth?