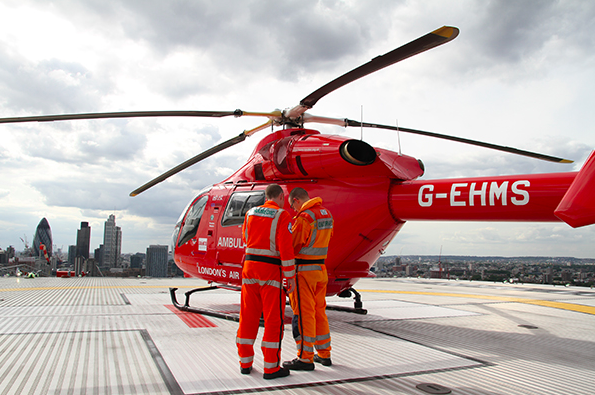 A London Ambulance Service union official commented to me a few months ago that the very nature of emergency services work is that front-line staff have to “rush into situations from which human instinct tells everyone else to RUN AWAY”.  Perhaps the medical situation that most people pray they will never have to witness and react to is traumatic injury.  See two cars slip over black ice and slam head on, watch a work mate fall 5 stories off construction site scaffolding, turn a corner and come face to face with a late night gangland stabbing.  But Emergency Medical Services (EMS) people will also tell you that trauma  “is the sexy part of emergency care”. How did close encounters with mortality get so sexy?

In June I started work at the Centre for Trauma Sciences, Blizard Institute, which is part of the Barts and The London School of Medicine and Dentistry in Whitechapel. Barts and The London Hospital is the biggest NHS Trust in the UK,  home to the UK’s busiest major trauma centre and is also the home of the London Air Ambulance service.  Every year, the Barts Health Trauma Centre  treats about 2000 people who have suffered traumatic injury, almost always raced there by the Helicopter Emergency Medical Services (HEMS) team. (A slight misnomer – the team of HEMS critical care paramedics and trauma doctors use land vehicles at night when the chopper can’t fly, and also during the day).

The Centre for Trauma Sciences is a world leading centre of excellence in traumatic injury research.   The Centre has been growing exponentially, and my role is to help communicate its achievements, and work with clinicians to provide on-line resources for trauma survivors and professionals working in the area.  My first major project is to develop a website/ forum for UK trauma survivors, as there is currently no ‘one stop shop’ where they can go to find out about what they are going through, the support on offer, and most importantly, find each other and share stories.

Here are some startling facts that are now in my brain that were not there 4 weeks ago:

But the latter time critical research is essential to advancing clinical knowledge and practice, and the C4TS – because of our relationship to Barts trauma centre, the number of patients seen every year, and our state of the art laboratory and infrastructure – is in a unique global position to make those advances.

Are you starting to get the sex appeal yet?

It’s about playing God – saving people from almost certain death, the ambulance worker and HEMS team having nerves of steel to rush into situations of horror and sometimes danger, the surgeons and nurses then making complicated decisions every second with everything at stake.

And then there is the passion that drives the best in the field.  Take a moment to watch trauma surgeon Professor Karim Brohi, head of C4TS – my boss –  tell his fascinating personal story about the patients who have affected him and why he has devoted his life to improving trauma care.

So I am obviously proud and happy to make my humble contribution to this wonderful human enterprise. And payback happens each day as I get to glance down from my mezzanine desk space to the vast laboratory below and watch in awe as the international scientists and assistants in lab coats hold and shake beakers, then move in and out of sterile rooms, then later in the day, lope back up the stairs in their shorts and runners, and move around the mezzanine area, leaning over each other’s computers, arguing over their results in languages from all around the world.

Probably the best day job I have ever had.

But months and years later, long after the lights and sirens died away, the chopper wings slowed to a halt, the high paid, high prestige surgeons have done their miracle work, scrubbed up and gone home – what happens then?  The recovery journey of the trauma survivor can often feel like a long day’s journey into night – for themselves, family, partners who are transformed into carers.  Old life gone, future dreams dashed, money gone, grief, post-traumatic stress, feelings never felt before, profound spiritual struggles.

And thats the gift I have been given, to work in this space.  Supporting survivors, occupational therapists, rehab specialists, psychologists and many others who want to improve the quality of life of people living with the long term ramifications of trauma.The space that seems to feel not that far from the loneliness that can seep in after sex and death.