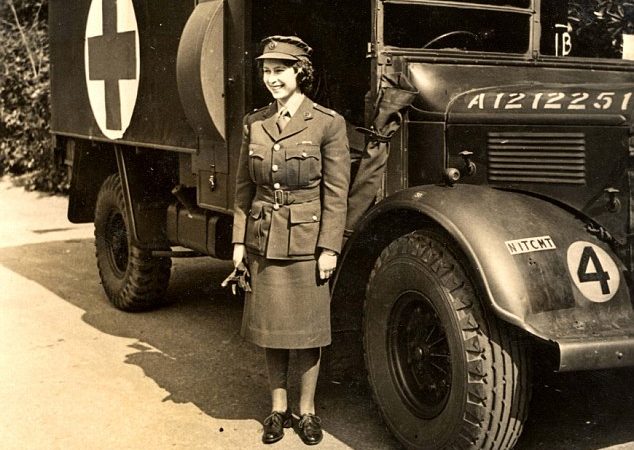 So lets imagine the Queen, a teenage war time ambulance driver and mechanic, this year decides to ditch her carefully crafted annual Xmas address to the nation and instead reflect upon the history and meaning of ambulance services. We’d switch on the TV, ‘A Message from the Queen’ in important font pops up, then soft focus close up of the aging monarch in Buckingham Palace…

How was 2014 for you? It was actually pretty dull for me. The same old round of public appearances and charity dos, God they just all blur into one. I’m 86, I’ve been a tourist attraction most of my life, an emblem of ‘British values’ in a nation I no longer recognise and frankly don’t particularly like. Why would anyone vote for David Cameron? I haven’t got an effing clue.

But there was a brief period in my life when I had a really good time. That was in the end days of the second world war, when I joined the Auxiliary Territorial Service, and I got to be a mechanic and ambulance driver.

I didn’t actually get to drag wounded off the battlefield and speed their shattered bodies off to medical attention in conditions of extreme danger. But I wished I had.

Its got me thinking about the history of civilian ambulance services and pre-hospital emergency medical care. You know there was a time when there wasn’t any. Back in the ’60s, in the States, if there was an accident, a hearse would generally turn up. If the person was alive, they’d get lobbed in the back and driven to hospital, no medical attention on the way, nothing. In the U.K, same deal, the word ‘ambulance’ might be written on the van, but the people driving it were just as likely to be plumbers or petty criminals. Needless to say, countless numbers of people, thousands, lost their lives on the way to hospital.

Now, we have this profession of paramedicine. Paramedics routinely save lives in-situ. You look at the stats, you see a clear trend – cardiac arrest survival rates relentlessly improving, proportionately fewer and fewer people being taken to hospital, more and more urgent care being provided in people’s homes. And we owe all this to the ever increasing skills of our ambulance workers. And their courage and heart.

Prince Harry, who is pretty good with social media, alerted me to a Facebook page ‘We Want The Rt Hon Earl Howe to Spend 4 Night Shifts on an Ambulance‘. My first reaction was – what a jolly good idea! Heck, I’d LOVE to do that! But then I started to read the blurb about what it was all about, and then some of the hundreds and hundreds of posts to it. And I could scarcely believe what I was reading.

So Lord Howe and Jeremy Hunt are actually proposing that – far from rewarding and supporting paramedics – they are going to make their lives even harder by forcing them to work until they are 68 to qualify for a full pension? When they are already paid less than their counterparts in the other emergency services who retire at a much earlier age? When there have been numerous reports and studies showing how long term ambulance work shortens people’s lives, makes them sick and creates high rates of PTSD?

I just want to say for the record – this is not the Britain I want to represent. The spirit of compassion and heroism and vision that came out of the second world war, that created the NHS, envy of the world, that’s what I remember and what I endorse. I do not endorse the feeble minded, parsimonious, ‘completely divorced from reality’ attitude of Mr Cameron, Mr Hunt and Lord Howe. Actually, I might scratch around in some ancient statutes and see if I can claw back Mr Howe’s inherited land holdings.

So anyway, that’s it from me this year. I hope you all have a safe and happy Xmas. But if you don’t, you can dial 999, and someone who has given up spending Xmas with their family will come and help you, and maybe even save your life.”