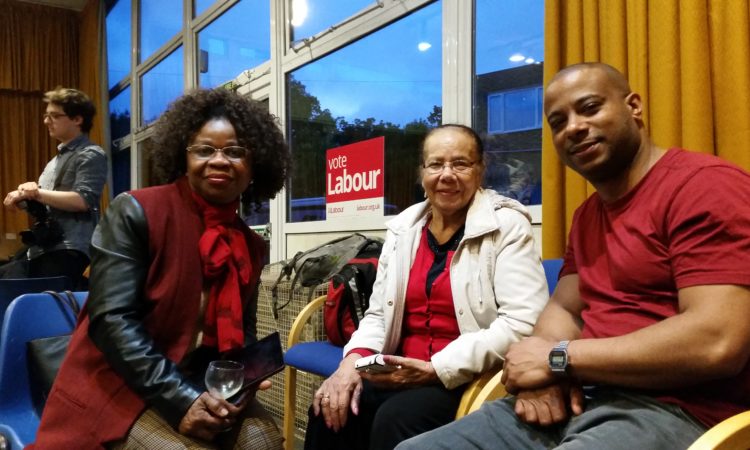 Getting Better All The Time

June Was the End of May

The last few weeks have been victorious ones for Skeltys’ campaigns.

I type this as Tory leader Theresa May is swiftly doing a deal with the Northern Ireland Democratic Unionist Party (DUP), a  divisive far right wing party of women and gay haters founded by hardline Protestant unionist Ian Paisley, – said deal being her only hope of clinging to power. May’s catastrophic performance in the UK general elections has left the Tories with insufficient votes to form a government in their own right. Far from “strengthening” her hand in Brexit negotiations by gaining a greater majority in the Commons, the snap general election has seen the Tories lose so many seats they cannot form government in their own right.  And Jeremy Corbyn has defied slanders and jaw dropping media bias, and internal party sabotage, to streak ahead in only 6 weeks to achieve 40% of voter support, about 8% behind Tories – a level of popular support for Labour leadership not experienced by the past 3 Labour leaders over more than a decade. And a lot of that has been a surge in people voting for the first time, particularly the ‘youthquake’ voting for the 68 year old Corbyn.

If you missed the Tory campaign (I know my handful of loyal readers include Australians and Americans), here is what it looked like: 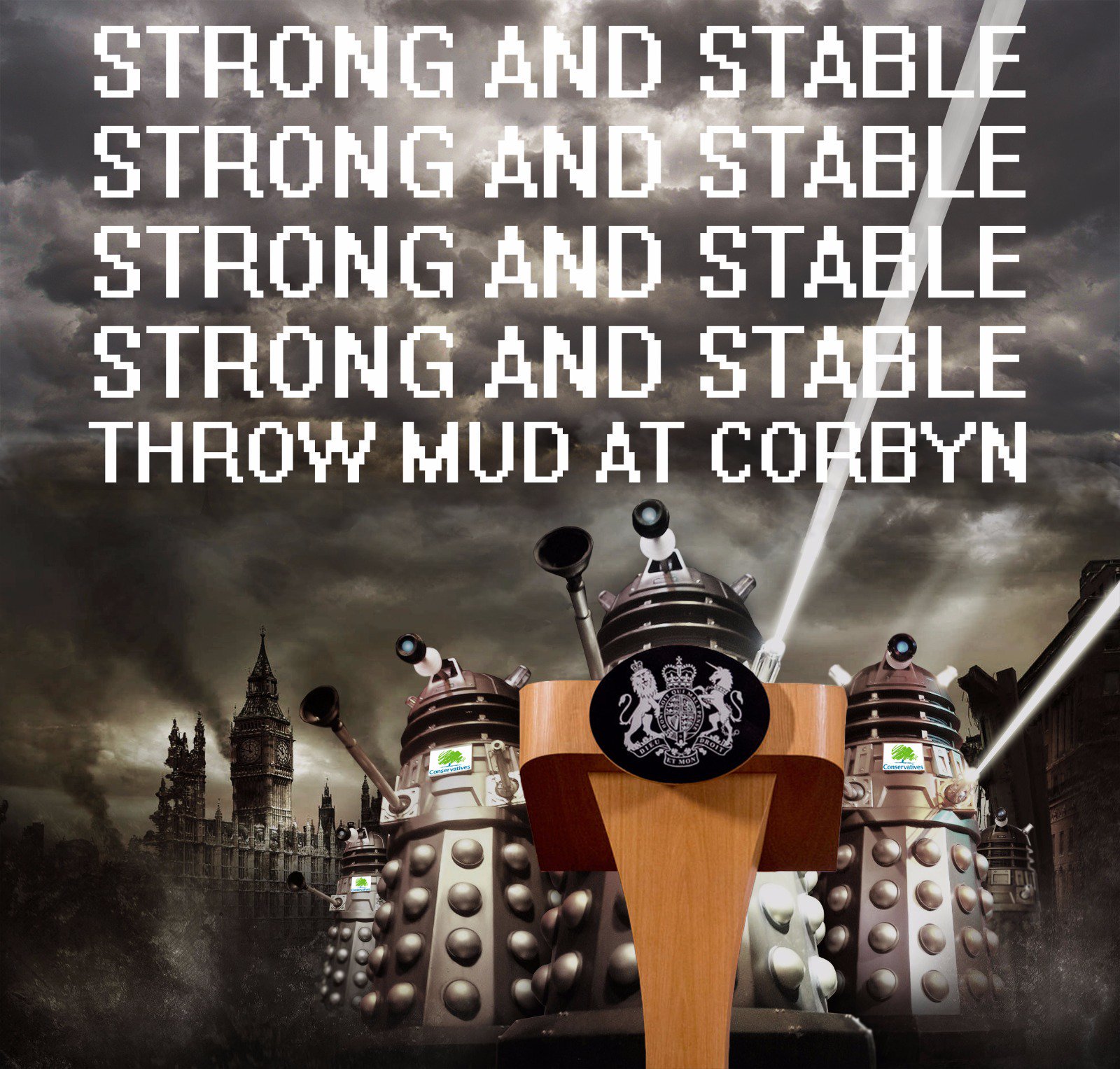 Like thousands around the UK, I took time off in the days leading up to election day to support the grassroots Labour campaign, particularly doorstepping for local Labour candidates. I must have clocked up around 30 miles tromping around my local constituency of West Lewisham and Penge (a safe Labour seat, but with the riskiness of a new candidate) and Croydon Central, a marginal which Labour had lost in 2015 by only 165 votes. But the true  ‘tramping for hope’ heroes were the young people who flocked to Labour marginal seats from all over the country, like the students I met from Oxford and beyond who doorknocked with me in Croydon two days ago: 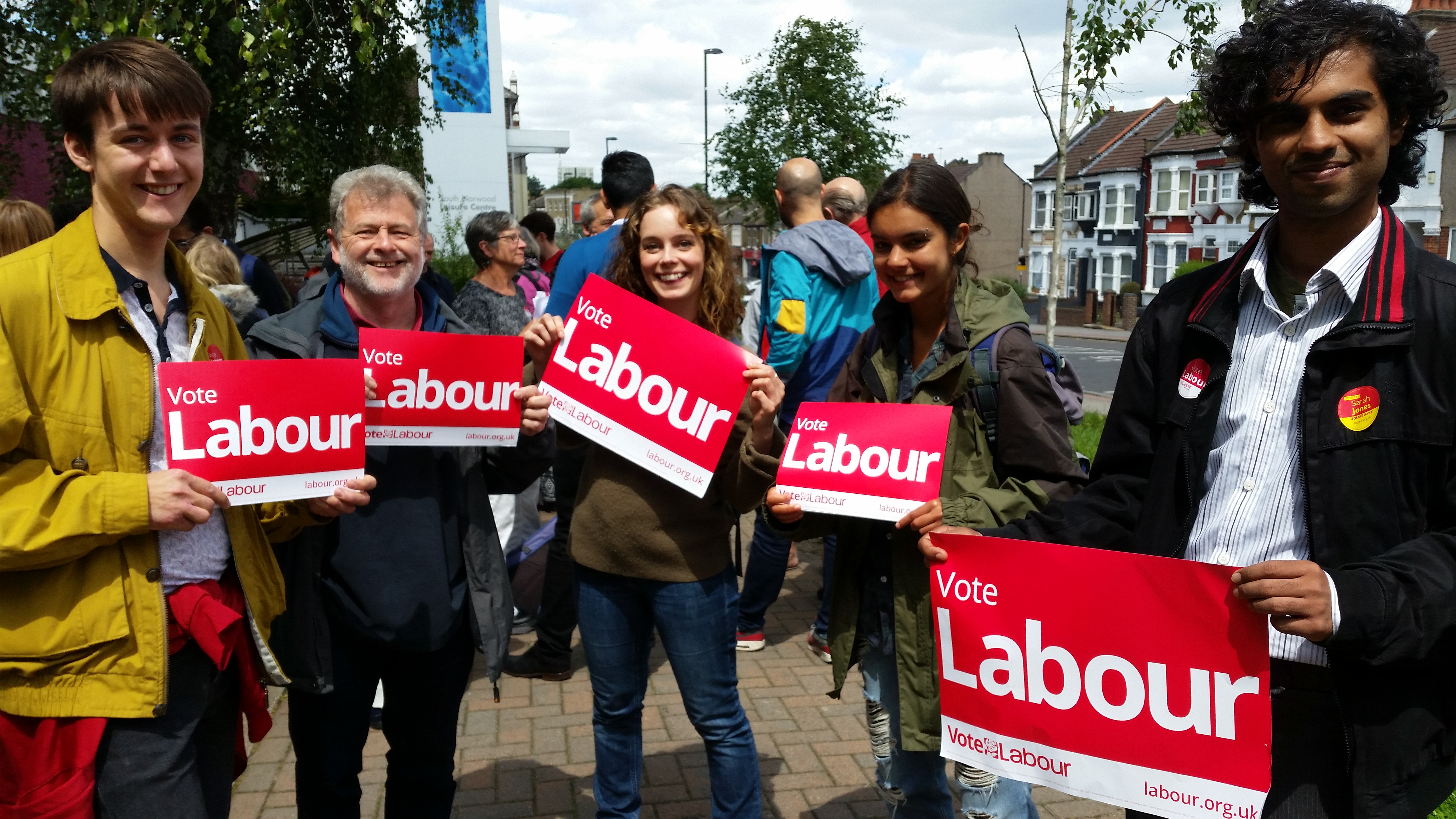 While the idea of rapping on strangers’ doors and hoping to persuade them to vote for your beliefs might sound as much fun as rubbing your head with a grater, it is actually a wonderful way to peek into the lives and living circumstances of people you would otherwise never encounter.  If I’d just hung out in my local digital ‘hood of shrink wrapped social media communities, I would never have experienced:

It was that crinkled little Irish lady that really got to me.

You can’t go up and down the internal concrete steps of old housing estates in South London –  see the peeling paint, the dark corridors with blown out lights, the doors with ripped out buzzers, inhale the stale food and damp matt smells, faded bric a brac crammed onto shared balconies – and not feel the sadness of poverty and austerity. But at twilight, from the street, they look painterly: 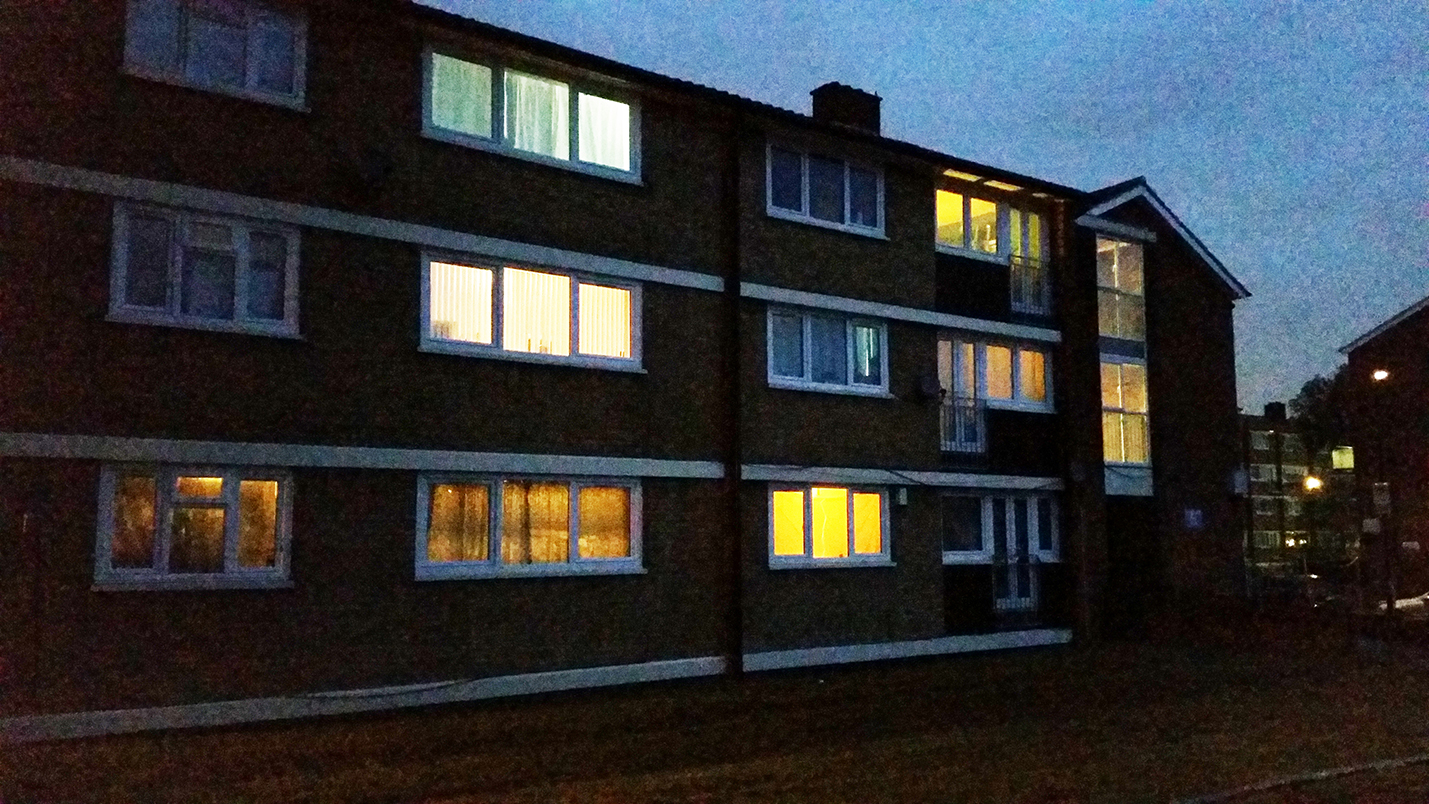 The Irish woman was about the same age my Mum would be if she was still alive. And she had Sheila’s twinkle in the eye, and stoicism in the face of such loss and loneliness.

After my allotted estate doors had been knocked, I footed it back down the fights of stairs and out again, back into the forecourt only to see the frail old Irish lass on the other side,  still standing outside her garage door, still looking at all of us running from flat to flat.  I walked back over to her as I wanted to know if, with the loss of her neighbour and best friend, did she have any support now, would she be ok? She said with a rasping gaelic lilt, “Oh yes dear, I have been around a very long time” I wanted to talk more, but then I got called off by the team leader to tackle another block of flats. I found myself fighting back tears as I sprinted off to the next crumbling staircase.

But by far the most common response I got when the doors were opened – whether Croydon estate or Forest Hill mansion –  was positive.  Big smiles, thumbs up, thank you for what you’re doing! tradesmen in vans waving and honking, the Nigerian off-license owner asking for posters, the clean shaven architect holding his toddlers’ hand. Yes, we are voting Labour! 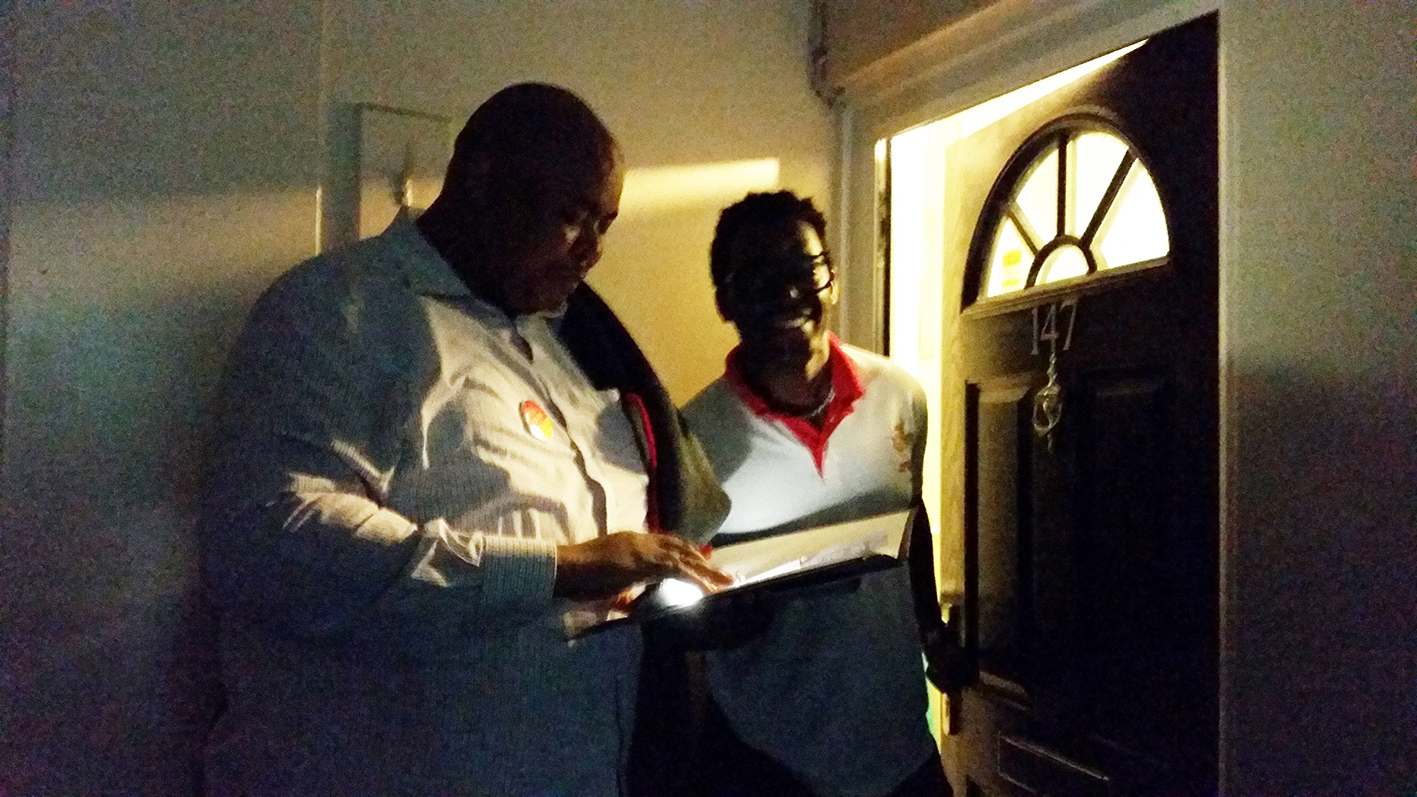 And they certainly did – in my constituency Ellie Reeves swept in with a 16% increase over 2015 results, and Central Croydon fell into the hands of Labour’s Sarah Jones with a handsome 6,600 lead – despite the sitting Tory housing minister having earlier written a book titled ‘How To Win A Marginal Seat’   A glass of schaedenfreude anyone?  And Corbyn’s Labour nationally gained 29 seats – enough to form a minority government if May hadn’t been lucky enough to grasp the drifting log of a right wing loony party to keep her leadership barely afloat – at least for now. But no-one thinks she will last the summer.

We all prayed for it and it happened – June was indeed the end of May.

My last blog marked the beginning of my 6 week long IndieGoGo campaign to raise money to complete my 12th album Deal With Your Disenchantment.  Deal With Your Disenchantment is a 21st century woman’s (me!) response to Bob Dylan’s finest works of the ‘60s/ early ‘70s.  I have 5 tracks already recorded, I need to record at least 3 more and all of them need to be mixed and mastered before they can be released.

I set a very high goal (£3900) which included professional artwork and some promotion, but I had very low expectations – thought I’d raise maybe £500 if I was lucky.  This was my first attempt at crowdfunding. 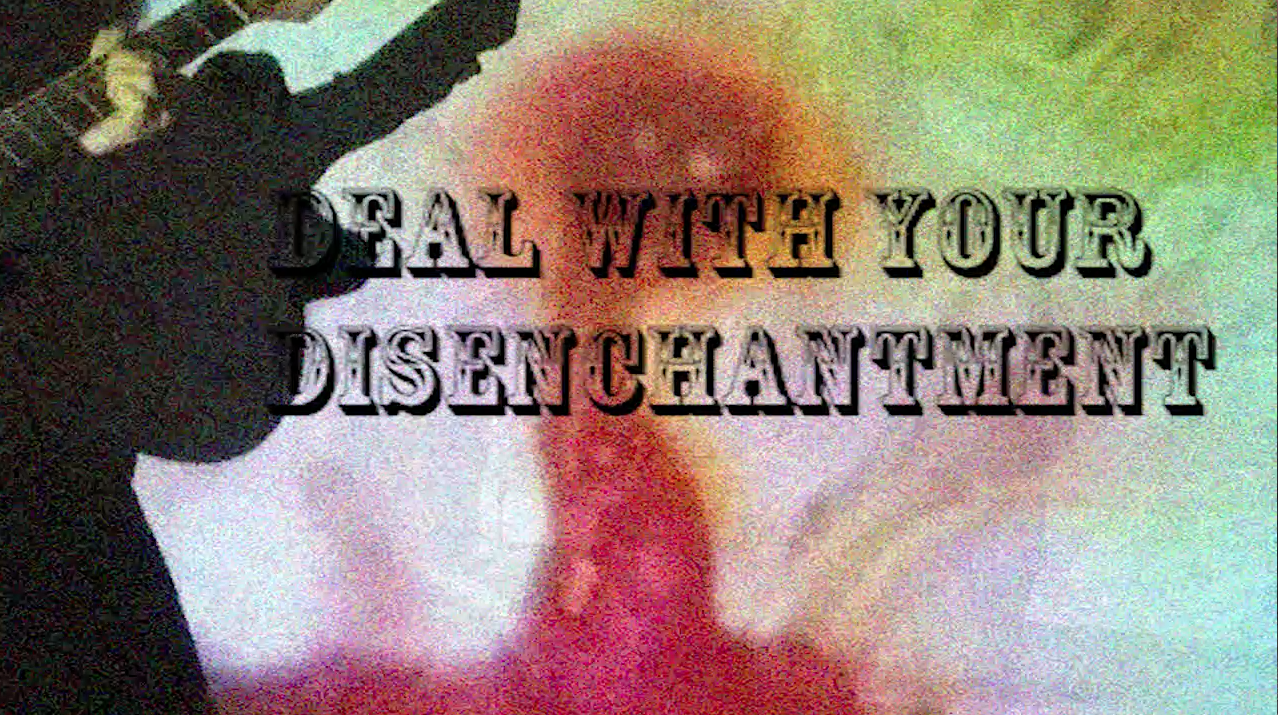 But by the time the deadline clocked in, I had raised a whopping £2800! Which is enough to finish recording the LP, including paying some of the wonderful London session musicians who have agreed to work with me to make this crazy but good project finally get released.

I found the crowdfunding experience intense and uncomfortable –  knocking on fans’ and friends’ digital doors asking for support, big emotional highs and lows. In the final 24 hours, the unexpected happened.  A swag of donations appeared, and suddenly I had the resources, encouragement and hope I needed to carry on. Including tremendous cash injections from incredible fellow artists such as John: 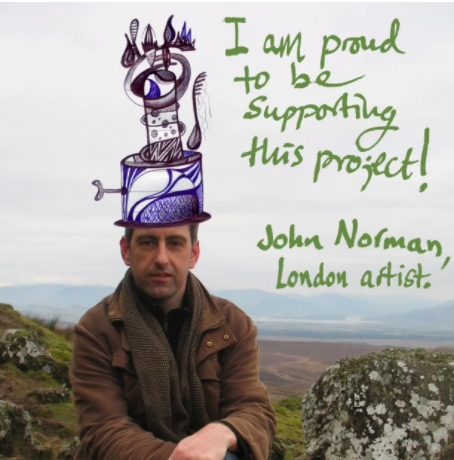 There are parallels with what has happened  in the last 24 hours with the UK general elections.

What links the two  campaigning experiences in my mind is this:  living proof of the generosity, compassion, optimism, imagination, intelligence, and plain old crazy goodness of people who are fed up with feeling disenchanted and are doing things – and making things –  a little better, all the time.  And nice to see that appreciation  that sometimes to move forwards, some of the best ideas were hatched decades ago, some of the people that inspire the young are old, and we can all sing songs your mother might know…