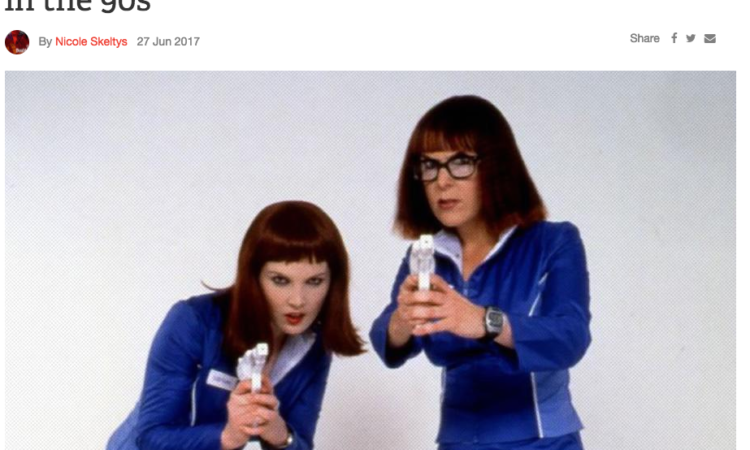 I was fortunate enough to be asked by Australia’s most popular indie radio station 2JJ to do two mixes of Australian ’90s electronica plus write liner notes for a retrospective they have just broadcast about that golden era. Transcript plus links below.  Hope you enjoy listening to these sounds (again) as much as I did!…

Nicole from B(if)tek takes us through the sound of the 90s electro underground.

Electronic music has exploded around the world in recent years. It has leaped out of clubs, warehouses and bedroom studios into the broader musical psyche.

But flash back to the 90s in Australia and electronica and dance music were deeper underground. Only a few flash-points, like Itch-E and Scratch-E’s ‘Sweetness and Light’ and the Filthy Lucre house mix of Yothu Yindi’s ‘Treaty’, poked out to reach a broader audience.

Embedded deeply in that electronic underground of the 90s were B(if)tek, a stylish electro duo originally from Canberra.

Nicole Skeltys and Kate Crawford made funky analogue electronica, inspired equally by kitsch cinema and the cutting-edge acid electro of the time. They stood out among their peers for their immaculate style, and winking sense of humour.

To wrap up the 90s on Double J this month, I asked Nicole to step back to that time and dig into her archives of cult Australian club and electronica tracks.

I wanted to know what Australian electronica really sounded like in the 90s. And Nicole obliged.

Nicole’s latest mix for Something More is available to stream right here.

Here Nicole talks about some of her key tracks from the time.

Telharmonium – ‘Listen To The Earth’

Telharmonium are Brendan Palmer and Toby Grime, the founders of Clan Analogue. This is from the very first Clan Analogue release, a vinyl record put out in 1992 shortly after the collective formed. This release literally transformed my life, when I heard it, it was like the doors of perception opened and I knew I had found my tribe. I wanted to be able to make incredible electronic flows with leftfield spoken word samples just like these guys.

These are a rare phenomenon – two ladies doing original infectious house in what was and still is a boy dominated genre.

DJ Toupee is Nic Lowrey, I remember when Nic came up with that name, we laughed so hard, a real pisstake of ‘guys taking themselves very seriously’ DJ culture. But it stuck, and she had a lot of success as a fantastic DJ and her love of independent noodlings went so far that she set up her own record shop, Slap Records, in Melbourne for a while.

Sobriquet is the very talented Elenor Rayner with a lot of cool releases worth checking out:

Telemetry Orchestra were a Sydney based Clan Analogue act who used to play with B(if)tek a lot, as we had a kind of similar aesthetic.

But TO certainly had the monopoly on ‘jet setting cocktails of exotic beats, lush sounds and analogue space junk’. And they had that hip indie crossover sound too. They actually played guitars and stuff which I was super-impressed with.

Steve Scott from TO is a very talented graphic artist, and he did all the iconic ‘retro-futuristic’ artwork for B(if)tek’s albums and EPs as well as many other Clan Analogue releases.

Artificial – ‘Authority Over The Fish’

Gotta get this one in. Apart from B(if)tek, I also produced and performed what I termed ‘stoner-hillbilly-house’ under the moniker Artificial. Very sample driven, lots of funky bass lines most of which I programmed myself.

I released two albums (Electro-Lollipop-Explosion, and Libraries are Fun) and three vinyl compilations, which I called (very tongue in cheek) Stoner Classix Vols 1 – 3. The Stoners have remarkably had a recent revival, even getting some spins at Fabric and other popular clubs in Europe.

‘Authority Over The Fish’ was the Artificial track that Triple J picked up on their playlist back in the day.

Dark Network are Tim O’Loughlin and Bo Daley. They set up Clan Analogue Canberra along with myself and Kate (B(if)tek), and Nick Wilson (Continuum). We used to borrow each other’s analogue gear, like a System 100 module and step sequencer, and an ancient 128 kb Akai sampler that you could use to do some wicked resonant filer modulation.

Dark Network would hire generators and hold illegal ‘forest raves’ in the dead of night in woods around Canberra. One time Tim had strapped himself to the ceiling of a disused warehouse and was ‘performing’ with his synth when the police raided and took him in for questioning.

DN’s extreme talent was in inverse proportion to their refreshing lack of motivation to promote themselves. I put some of their greatest ‘90s ‘hits’ on the Stoner Classix series, but they didn’t end up releasing their own CD until 2003, about ten years after they formed.

While Clan was dominating the Sydney/ Canberra underground scene, Psy-Harmonics was doing likewise in Melbourne. The independent record label was the brainchild of Ollie Olsen, Andrew Till, Bruce Butler and Simon Polinski, releasing consistently innovative material from 1993 to 2010.  Their huge impact on the local electronica/ industrial/ rave scene cannot be overstated.

Shaolin Wooden Men is the legendary Ollie Olsen, although he tried in the early days to keep the identity of the act secret (these were pre-internet days!). I don’t know anyone who didn’t have their mind blown by ‘Ohar’ when they first heard it, and saw the accompanying graphics by Troy Innocent.

Voiteck is a Melbourne based artist, who was a pioneer of the hard, stripped back early techno sounds that came to dominate the Melbourne scene along with industrial/synth/noise political bands like Snog.

There is a Berlin/Detroit influence on his tracks, but he had a very Australian take on it. Tremendously inventive, this is one of his earliest releases, kind of a twisted synth sound haiku, on an album released by Seraphic. Seraphic were one of the passionate Melbourne based ‘micro’ labels who supported 90s electronica and experimentation.

Zen Paradox is Melbourne based artist Steve Law. This track is from his classic 1993 release Eternal Brainwave on Psy-Harmonics.

At the time, I’d just discovered the dreamy urban extended electronic sounds of European bands like Future Sound of London, and it blew my mind that here was someone in Australia producing something of the same sophistication and appeal.

This track also captures the trance elements that were so loved by Melbournians, in contrast to Sydney where house beats were more popular.

B(if)tek were myself and Kate Crawford, we produced and performed together for eight years (1995-2003). Highlights include supporting the Beastie Boys on their 1999 tour, recording and filming a track with (the original) Twin Peaks chanteuse Julee Cruise, playing sell out shows at the Sydney Opera House and headlining the dance stages of many major festivals around Australia at the time.

An A&R guy from Sony spotted us performing in nurse outfits at a Clan Analogue Sydney gig and signed us up. There was a brief moment in the late ‘90s when major labels were trying to snatch up this ‘new sound’ after Fatboy Slim showed you could actually chart with electronic/sample driven music.

This track was on the 2020 album, and the video clip, shot at Sydney’s legendary queer music space Club Kooky, was the first time an independent girl-tronica outfit got shown on prime-time TV Video Hits programming in Australia.

For more sounds and more from Nicole, check out her website.

Want to stay connected to more bands and artists?