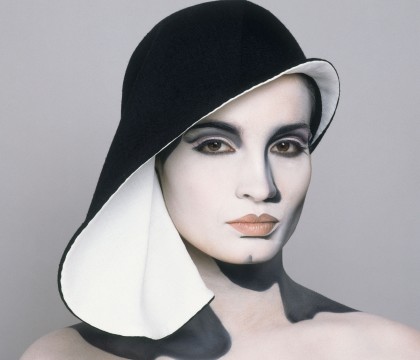 ‘A Life Exposed’ is a documentary feature directed by Lesley Branagan, soundtrack Nicole Skeltys and Byron Scullin.  This is a dazzling film that was premiered at the Sheffield DocFest in June 2013, since shown on ABC TV  and Dutch TV (AVRO) and other cinema screenings.  Synopsis below:

A photographer at the height of London’s high fashion world finds that fame and success are no longer enough.

Australian-born photographer Robyn Beeche became renowned in London for her iconic images of the 80s. In a time rich with experimentation and creativity, she was celebrated for her ground-breaking photographs of painted bodies, and her collaborations with counter-culture personalities Zandra Rhodes, Vivienne Westwood, Leigh Bowery and Divine.

Using the human body as a blank canvas on which to splash images,Beeche used tricks of make-up, lighting and composition to present trompe l’oeil techniques to great effect – long before Photoshop existed. These trademark shots featured in international publications, setting the style zeitgeist for a generation  andinspiring video clips and album covers for pop luminaries David Bowie and Visage.

At the peak of her 80s career, Beeche was transformed when she first experienced the Indian colour-throwing festival of Holi. “Drawn like a magnet”, she gave up her high-flyer London career for the life-changing move to India, and a new spiritual focus to her photography. She immersed herself in her area’s vibranttraditions, playing avital role in documenting them before they change beyond recognition due to rapid modernisation. 25 years later, her extensive archive is prizedby international scholars, and her passion for documenting the vibrant local traditions continues unabated.